It depends what team you’re playing on (or cheering for).

And… it depends on whether you’re on a power play or a penalty kill.

In this article, we’ll cover why icing in hockey can be bad. We’ll also look at exactly when it’s waved off, and how you can avoid an icing penalty.

Here’s Why Icing in Hockey Is Bad:

Icing is bad in hockey (most of the time). If you ice the puck, you’ll be penalized with a face-off in your own zone. The problem is that the opposing team is allowed to make a line change before the face-off, but the team who committed the infraction isn’t—resulting in a fatigued line. 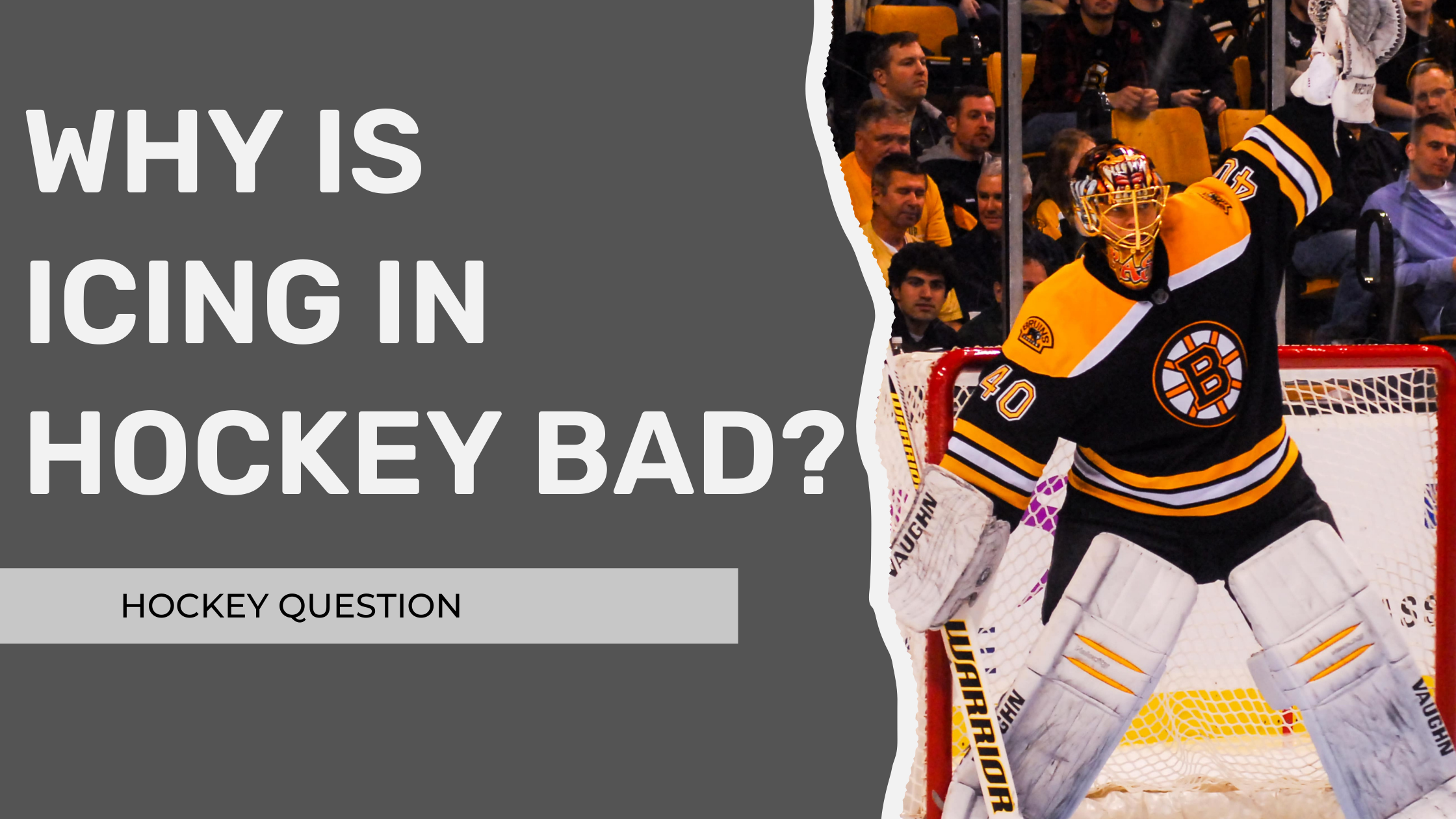 Why Is Icing in Hockey Illegal?

The “icing” call keeps the game flowing while ensuring teams get increased chances of an offensive opportunity. Without it, the game would be much more defensive—and less entertaining.

If icing wasn’t illegal, and defending teams could just fire the puck down the ice every time it got in their zone, we’d have 60 minutes of teams shooting the puck the length of the ice, forcing the opposing team to repeatedly retrieve it.

Ultimately, icing in hockey is illegal because it would make hockey more boring and less entertaining overall.

By making it illegal to ice the puck, it increases the odds of the offensive team scoring, which is always a good thing.

Without the rule of icing, hockey would be much more boring to watch, which is why it’s illegal.

When Is Icing Waved Off (Canceled)?

Icing occurs when a player on his own side of the red center line shoots the puck all the way down the ice and it crosses the red goal line (outside of the net).

There are some reasons why icing isn’t illegal—or it’s waved off:

Perhaps the most exciting way an icing call is waived is when the puck crosses the goal line.

Here are a few examples:

Icing will be nullified or waived off during the play. Players may look to the official for a call when the play is live, but if there is no call (or it’s waived off), the play will continue live. This prevents any stoppage in play to keep the flow of the game going.

How to Avoid Icing in Hockey?

Icing isn’t always avoidable. However, there are a few ways you can prevent it from happening.

The first way might seem quite obvious, but the best way to avoid icing is with a solid pass.

The most typical icing call occurs when a defending player simply misses his pass to his teammate, and it ends up going all the way down the ice.

One way to avoid this is by trying to make short passes to the outside of the rink (wingers), rather than down the middle of the ice.

Another reason icing occurs is simply out of panic. The defending team isn’t sure what to do so they purposefully send it down the ice, hoping they didn’t lob it too far for icing.

This requires much more skill to shoot it out hard enough to relieve the pressure, but not too hard so it goes past the opposing red line.

There are two ways you can reduce the odds of icing the puck this way:

2. Better Defense in your own zone. A much better overall strategy is to simply avoid having to shoot it out in the first place. Panicking in the defensive zone often leads to firing it out and getting an icing call. So work on your defense.

Get better at defending in your own zone individually and as a team. When you’re able to be a confident defender, you’ll panic less, allowing the puck to get out of your zone smoothly.

What Is the Penalty for Icing in Hockey?

If a team ices the puck, there’s a simple consequence.

Simply put, icing sends you back to where you were.

But, that’s not the only downside to icing the puck. The other major component is that the team that committed the infraction isn’t allowed to make a line change, while the opposing team can change shifts.

This makes it even harder to defend since you’re getting fatigued, while the other team has more energy coming into the face-off.

In the 2020-21 NHL season, the league took away a team’s ability to call a time-out following an icing infraction.

Before 2020, if a defending team iced the puck, there would be a stoppage in play and the team would be penalized by taking a face-off back in their own zone.

Coaches would often use their one, 30 second time-out in the game after an icing call (often in the third period when they’re down a goal or two).

The reason coaches would call the time-out is one simple reason: the players are too tired.

One of the reasons icing hurts the team that causes the infraction is because they aren’t allowed to change lines. This means the line who ices the puck has to stay on the ice for the next face-off. Meanwhile, the opposing team can get fresh legs out there, giving them an advantage.

In the 2020-21 season, they made it a rule that teams couldn’t take a time-out after their icing infraction. This change in the rules occurred to allow for a greater offensive opportunity for the opposing team, leading to more scoring chances.

Can You Line Change on Icing?

During an icing call, only one team can change their line: the opposing team.

The team that committed the icing infraction is not allowed to make a line change as part of the penalty. However, the other team can change their line.

This results in a greater scoring opportunity for the opposing team.

Is There Icing During a Power Play?

During a power play, if the team with the advantage ices the puck, it is considered illegal, and they will be called for the infraction.

However, the team who is down a man on the penalty kill can legally ice the puck.

The team on the penalty kill is allowed to ice the puck in this scenario—one of the few times when icing is nullified.

In either scenario, icing will still be called as it would regularly.

During even strength play, icing will always be called a penalty. This is true in:

Looking for more answers to the most common hockey questions? Be sure to check out our other popular blog posts: Is There a Size Limit for Hockey Goalies and What’s the Best Height for Ice Hockey!

There isn’t a more important piece of equipment than your helmet. Your head needs to be protected when you’re on the ice. Ice hockey is the fastest team sport in the world… which means...

Continue Reading
link to Why Does The Goalie Leave The Net in Hockey? (2 Simple Reasons)

Goalies are a different breed. Whether it’s hockey, soccer, or lacrosse, goaltenders and goalkeepers have to have tough skin and maintain a healthy mindset to compete. But… some things they...

Welcome to Hockey Question! I'm Brandon, a life-long player and fan of the greatest sport in the world. If you've got hockey questions, I've got answers—whether you're just beginning your hockey journey or you're a life-long fan. Explore around, and feel free to reach out if you need help!

This site is a participant in the Amazon Services LLC Associates Program, an affiliate advertising program designed to provide a means for sites to earn advertising fees by advertising and linking to Amazon.com. We are compensated for referring traffic and business to Amazon and other companies linked to on this site.